The MicroVAX II – Workhorse of the 80’s

“MicroVAX II is one of the most significant and exciting products we’ve ever had” – Ken Olsen, 1985

“Most of the computers that have come out of the computing room so far have been relative toys compared to MicroVAX II … Moving this enormous performance and enormous capability out of the computer room provides opportunities for human beings to interact, to deal with computers in a friendlier, more productive environment” – Jeff Kalb, vice president, Low-End Systems and Technology, DECWORLD, July 1985

“MicroVAX is a whole different mind-set, different class of machine … We’re really going for new business, new opportunities, where you can open up new markets by taking the VAX performance and functionality and dropping it down to a different price range” – Jesse Lipcon, MicroVAX II program manager,  DECWORLD, July 1985

The CPU had one Megabyte of internal RAM, and used a flat cable to connect to up to two RAM boards, to reach a maximum total of 16MB. If 16MB of RAM is installed, the internal 1MB is automatically disabled.

There are four MicroVAX II’s in the museum. Two in the cool BA23 tower, one rackmount , and one in the 60Kg BA123 enclosure.

This BA23 was once a “RT-1000”, a real-time VAX with a KA620 processor. It is identical to a MicroVAX II enclosure, except for the badge.
It has the following boards installed:

The UC07 is tied to a SCSI2SD board with a 16GB SD card installed, divided into 4X4GB partitions, visible to the MicroVAX as DUA0, DUA1, DUA2 and DUA3. It is also tied to a long, 50-conductor flat cable, for connecting to an external SCSI tape drive or a RRD42 CDROM.
This machine currently runs VMS 5.5-1. 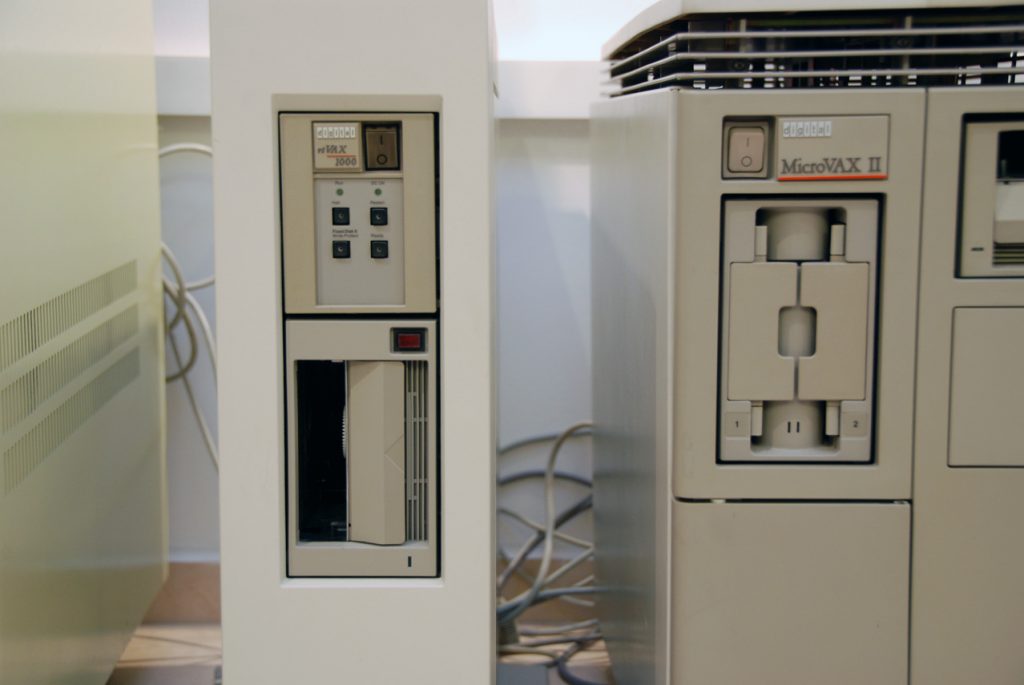 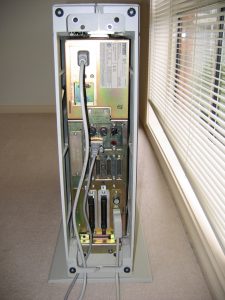 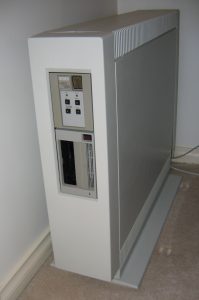 The BA123 machine has the following boards installed:

The BA123 machine has a TK50 tape drive, and an RX33 double floppy drive. It used to have a WQESD ESDI disk controller and a CDC ESDI hard drive, but those were replaced by a SCSI2SD board tied to a UC07 controller, with 4X4GB partitions.
This machine currently runs VMS 5.4 . 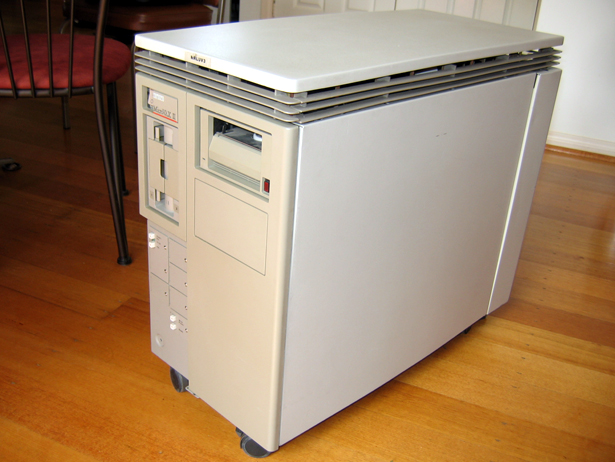 The rear panel photo shows 8 serial ports for connecting terminals or printers, a DELQA ethernet port, the console cable, and BNC connectors used by the 2-plane graphics cards some very time long ago. 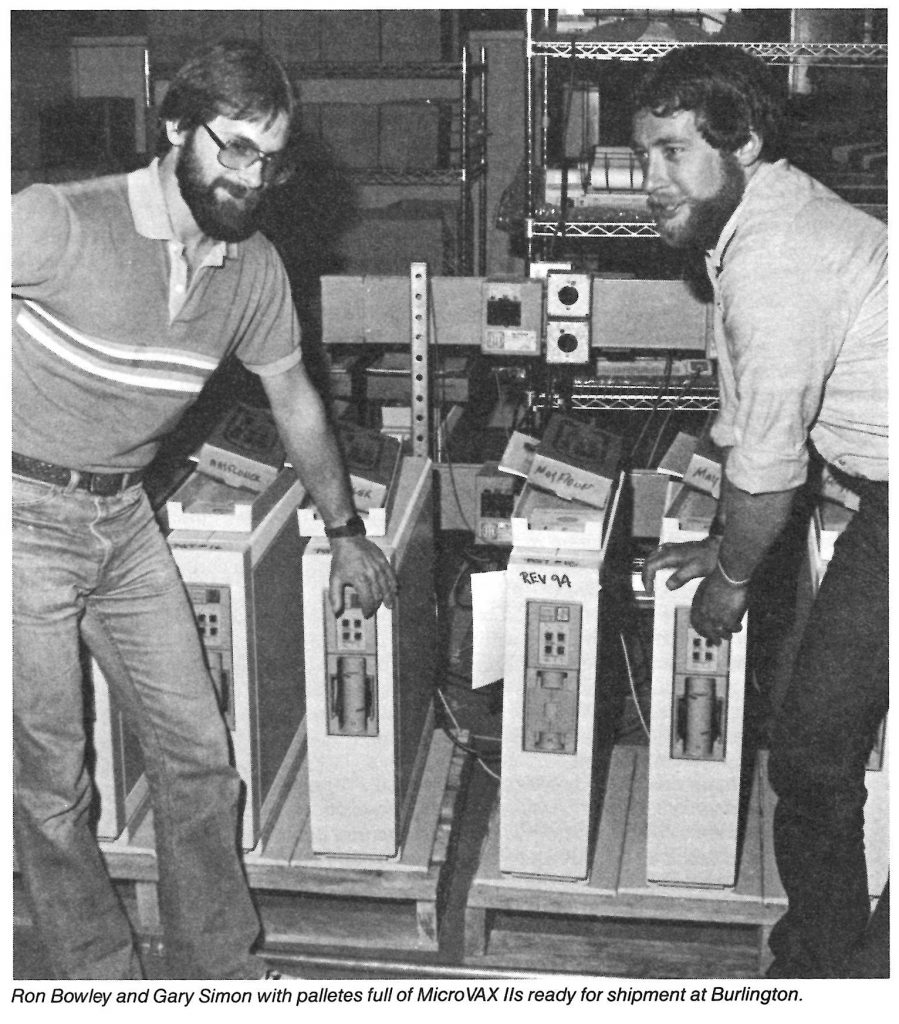 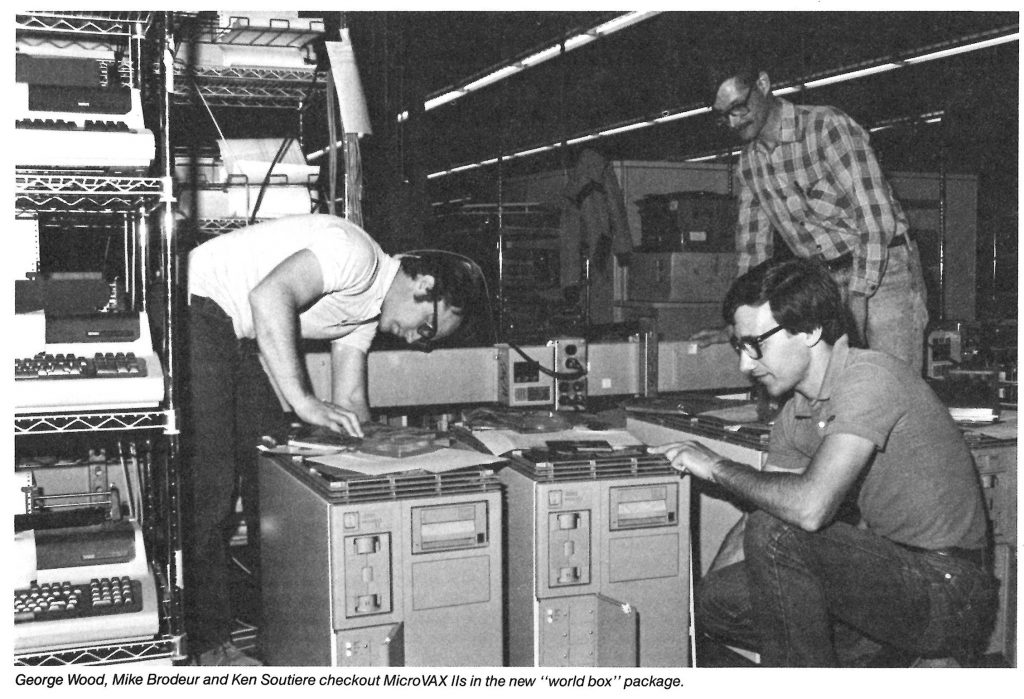 More On the DSVAX III

(Note:MicroVAX II hosted site is only available over IPv6)